An Update on Stefan ... and Us

We told you about our nephew (he's really a great-nephew, or maybe it's a grand-nephew, I really don't know, and just saying "nephew" is easier!) being injured in Afghanistan. We have learned more about what happened to Pfc Stefan M. LeRoy a few weeks ago, and are getting updates on his condition. Everything we learn we get from the Caring Bridge website, which you can see by clicking on that link.


By the way, a huge gracious thank you to all of you who sent prayers and encouraging words either to Stefan by way of Caring Bridge, or to us. That means a lot to all of the family!


It seems that Stefan and a sergeant named Andrew Mills were carrying a wounded soldier on a stretcher when Stefan stopped on an IED. That's when all hell broke loose and Stefan, Sergeant Mills and seven others were wounded. Sergeant Mills had significant damage to his legs, Stefan lost both of his legs near the knee, and Brandon Goodine eventually died from his wounds.


Today Stefan, Sergeant Mills and perhaps others from their platoon are at Walter Reed Army Medical Center in Bethesda, Maryland, apparently being well cared for and in excellent spirits.

That's our Stefan in the middle, with Sgt. Mills on the left.. The man on the right is also, by coincidence, another Sgt. Mills!


Stefan had some visitors yesterday, including Tony and Densie Hock, the aunt and uncle of Brandon Goodine, the soldier on the stretcher Stefan and Sgt. Mills were carrying. Here's what Stefan's Mom and Dad said about that visit:  They came to the hospital to thank the guys. Denise said exactly what Stefan needed to hear, to not blame himself for what occurred.  It was a very emotional hour or two.  Her visit with him was probably the most important visit of the day.


Another visitor yesterday is pictured here:

Here's what we read about this:
We had heard rumors that President Obama might visit the hospital.  They had lots of suits on the floor and a blue curtain in the corridor. At 2:00 they used a metal detector on family members and checked out the room.  He went to every room on the floor thanking the soldiers for their service and sacrifice and the families for their sacrifice.  He shook hands with all of us, but Kathy (Stefan's Mom) got a hug.  Stefan also got the presidential coin.


And here's the Presidential Coin, front and back.

A big day in the life of a wounded soldier!

As for us, we're still rolling along. Wednesday, we prepared Chicken Cacciatore for 30 people at the club house. Suzy was nervous, having not cooked for more eight or ten, and usually only for family and close friends. 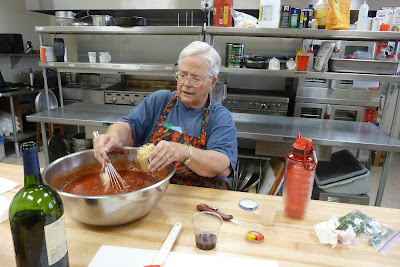 We used ten pounds of boneless, skinless chicken breasts, two pounds of fresh mushrooms, lots of fresh onions, bell peppers, summer and zucchini squash, and Suzy's own secret blend of spices. It's a secret, because it changes every time; there is no recipe, she just has to balance the aroma! We will say that she used fresh rosemary and fresh basil right from our own garden!

We are making loose plans for next summer's big trip. How loose? Well, we've looked at probably eight different route variations, have books and magazine articles strewn everywhere to locate points of interest along the way. The main things are Grandson Sam's high school graduation, as much family as possible, and probably the SKP Club's Escapade in Gillette, Wyoming in September.

And of course, it's H~O~T here in Benson, Arizona where we live a major portion of ... Our Life on Wheels!